Honey bees are among the most useful creatures in the world; not only do they provide us with honey and other byproducts that we may consume as food, but honey bees and other bees play an essential role in the pollination of plant life. It’s been estimated that around 30 percent of the food that people consume around the world is reliant upon pollination by bees. However, we’re just as likely to find bumblebees in our gardens as honey bees; how can both of these kinds of bees differ? 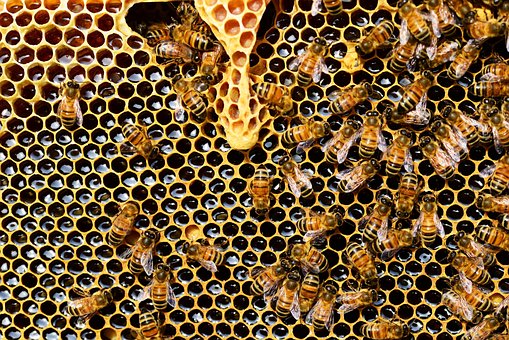 Even though there are more than 250 known species of bumblebee, there are only 7 recognized species of honey bee. Both play a role in the pollination of vegetation. Both are social animals, living in colonies, and thus worker bees gather nectar from flowers to take back to their colonies, for consumption and to feed to their young.

Beekeepers increase honey bees for honey, beeswax, and other industrial products; bee colonies maintained by beekeepers can last many years, and those bees in the wild also tend to establish permanent homes. Typical honey bee colonies have 30,000 to 50,000 bees, whether domesticated or in the wild; the vast majority of the bees in a colony are female worker bees, who are sterile and perform almost all the work of the colony. Colonies also contain a queen, who’s capable of laying eggs and producing young; and a few hundred male drones, whose sole function is to mate with the queen.

Bumblebees don’t build permanent homes as honeybees do; they often nest in tunnels in the ground, though occasionally they will manufacture a wax canopy for protection. Bumblebee societies are structured similarly to those of honey bees, with workers, drones, and a queen fulfilling specific purposes, but bumblebee workers aren’t sterile; they are able to lay haploid eggs that develop into male drones. Only queens have the ability to lay diploid eggs which can mature into female workers and queens as well as males.

This reproductive competition between the queen and the workers results in colony behaviour that differs from that of honey bees. Early in the reproductive system, the queen will suppress the egg-laying ability of her workers by physical aggression as well as pheromonal signals. The queen will thus produce all of the first male larvae of that season, as well as all the female larvae. Since the queen’s ability to suppress the workers wanes later in the season, worker bees, too, will start to lay eggs that produce male larvae.

After they’ve matured, new males and queens will be driven from the colony; those outcasts spend nights on flowers or in cavities in the ground. The queens and drones will also mate with each other; a mated queen will seek out a suitable location to hibernate through the winter. The next spring, the queen will emerge from hibernation and discover a place for a nest.

Bumblebees do produce honeyfrom the nectar they collect from flowers; the procedure is very similar to that of honey bees. But, honey bees tend to produce more honey than they need; it is thus easy for beekeepers to harvest honey from domestic hives while leaving enough for the bees’ particular needs. Since bumblebee colonies are so much smaller, they are hardly able to produce enough honey for themselves; beekeepers therefore don’t try to raise bumblebees for their honey. Additionally, it’s difficult and usually destructive to extract honey from wild bumblebee nests. Bumblebee honey is perfectly edible, but thinner and more watery than honey .

It sometimes may be tough to differentiate between a them, but they are distinct animals with different customs and life cycles. Indialantic Bat Removal can help you.